What a huge difference just one month made. May 2019 was the worst May since 2010, and the second worst since 1962[1]. Then in June, the S&P 500 had its best June since 1955. Ever since President Trump unilaterally started the trade war with China (and the rest of the world), these ups and downs of the market resemble a whipsaw and have become a regular fixture for markets.

Growth-oriented assets dropped in May when trade tensions re-escalated. Then in June, central banks around the world caved in and started adopting an accommodative monetary stance to cushion May’s blow. Sentiments continued to improve after the G20 summit in Japan, where yet another trade truce was brokered between the US and China. In short, central banks are at the mercy of Trump’s political circus.

The trade war is starting to resemble Whack-a-Mole
Everything, from stocks to bonds and gold, (and other than the US Dollar) rallied in June. Figure 1 shows how returns for “growth-oriented” asset classes (in dark blue) swang from very negative in May to very positive in June. Last month, US technology sector stocks outperformed the most with an 8.7% return. Gold and Consumer Discretionary stocks closely followed, returning 8% and 7.6%, respectively. We can attribute the 1.6% decline in the US Dollar in June to the Fed surprisingly flipping from being adamant on rate hikes to showing a “readiness to ease if necessary”.

It seems that President Trump is always angry these days, and that’s because his plans don’t exist in a vacuum, and so they are being affected by things far beyond his control. Imagine a game of Whack-a-Mole: you hit one mole, only for three more moles to pop up. In this case, President Trump whacked China with trade threats, and three new issues popped up that he wasn’t expecting. And he’s not happy about it.

What’s he not happy about exactly?

First, President Trump is angry with Vietnam because the world is circumventing the effects of tariffs imposed by the US by re-routing of trade flows through Vietnam. The Wall Street Journal[2] reported that Vietnam’s imports of PCs and electronics from China has increased by a whopping 81% YoY in May, and in the same month, there was also a 72% surge in Vietnam’s exports of the very same products to the US. What a coincidence...

Second, the Chinese Yuan depreciated 4.1% against the greenback during the re-escalation of the trade war between 17 April and 17 May. The depreciation of the Yuan makes Chinese imports cheaper, offsetting his tariffs.

And finally, there are the central bankers. Specifically, he’s angry with Jerome Powell, Chairman of the US Federal Reserve, because the Fed pledged a readiness to act, but hasn’t yet cut interest rates at all. For “Make America Great Again” to work, Trump needs his central bank to provide more market support than the central banks on the other side do. But central bankers on the other side, such as Mr Draghi, outgoing Chair of the European Central Bank, have been doing more to support the markets than the Fed.

These three issues, or moles, have fortunately greatly weakened the trade war’s impact on the markets. Once again, the economic damage of the trade war has been overhyped and overrated by the media.

How to survive President Trump’s wake

These market ups and downs and other external factors foiling President Trump’s plan demonstrate perfectly how crucial it is to take a long-term view with your investments. In other words, we can’t get caught up by short-term noise in the markets because we never know what else will pop up. What will Trump tweet about tomorrow?

Having just experienced May and June’s whipsaw, as well as the multiple market corrections of 2018, it’s impossible to under-emphasise how natural and unavoidable these market swings are.

What we also can’t under-emphasise is that these market ups and downs are common and quite manageable. How can you manage them? Stick. To. Your. Plan.

Dollar-cost averaging versus timing the market 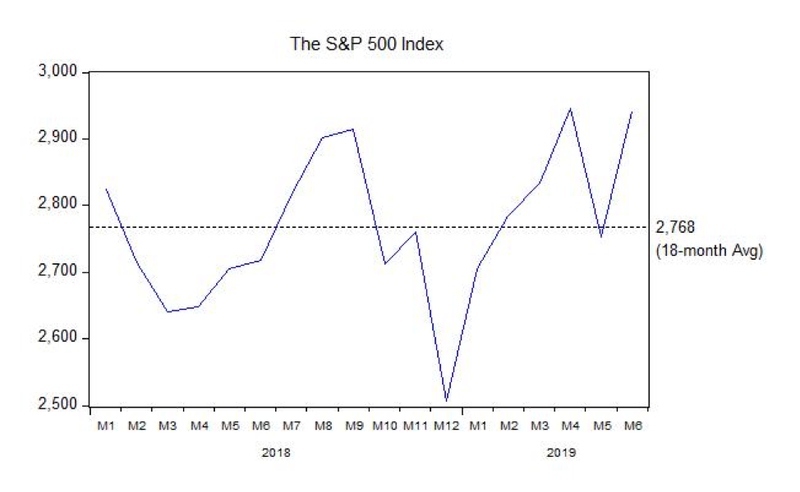 It doesn’t take an economics degree to see that there was a lot of volatility in the last year and a half. Throughout this volatile period, we’ve seen a lot of investors making reactive decisions to these ups and downs: Some were timing the market, aiming to buy low and sell high. Others got out of the market when it would drop in order to “protect their money”, and then got excited about the great sudden returns and so put more money in.

Then, there were the systematic investors: those who stayed invested with a dollar-cost averaging strategy, and didn’t bother trying to understand where the bottom of the dip would hit. They invested every month, consistently, through the ups and downs, perhaps through a standing instruction.

So what happened to the different types of investors? The people who exited the markets in Q4 2018 out of fear missed out on Q1 2019’s huge rebound. The investors who made reactive decisions ended up putting their investments through greater ups and downs in a period of such great volatility.

Look at the bigger picture

If you only look at Figure 2, sure, you could think that the market is volatile. But now take a look at Figure 3: The price of the S&P 500 over nearly 40 years. Not so up and down, is it? Sticking to a dollar-cost averaging strategy for the long-term enables you to effortlessly enjoy the near 40-year growth trajectory of the markets. The way to leverage that upward trend with a systematic plan and to stop making emotionally-driven investment decisions. 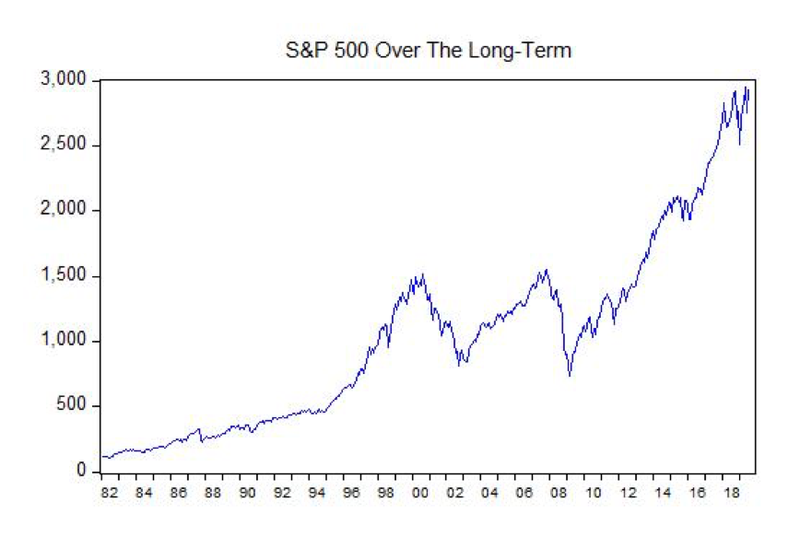 Sure, there will be a few exceptional (or lucky) market timers who beat everyone else in the market. But President Trump’s flip flopping and the world’s unexpected reactions make market timing and investment reactions even more difficult.

The moral of the story here is: whoever can stay invested wins in the long term.

What is StashAway doing about market volatility?

Not much, because we already designed our long-term portfolios to withstand short-term volatility. Our portfolios are highly-diversified across asset types and geographies, and our investment team continually researches new ways to make your portfolios even more durable in the long term. This isn’t to say that you’ll never have short-term drawdowns; rather, it means that your investments will be able to recover from short-term drawdowns more quickly than if you were in a portfolio that wasn’t intelligently diversified across asset classes. These features are built in to enhance your staying power so you can achieve your financial goals over time.

All you have to do is simply be patient, ignore the noise, and stick to your investment plan. It’s ok to look at returns on our mobile app every once in awhile, as long as you keep your emotions in check.