A few days ago, we sent you a short commentary on what was happening in the markets. In this monthly newsletter, we look at the same set of facts, and with more detail.

After the markets surged to new heights on 26th January, there has been a lot of volatility in the stock markets around the world. Some attribute the pull-back to the typical reaction to big surges driven by FOMO (“fear of missing out”). Others are concerned about the potential for a global trade war ever since Trump and Mnuchin talked down the US dollar at Davos.

Regardless of what has happened, it’s critical for long-term investors like ourselves to put these events into perspective.

Only have 30 seconds? Here’s what you need to know:

We are having a Correction, NOT a Bear Market.

What’s been happening in the markets?

We started 2018 with a serious case of FOMO (“fear of missing out”), as people, getting excited by the strong market and cryptos alike, started jumping in even more than before. This propelled global stock markets to new highs. At their peaks on 26th January, both the S&P 500 and the MSCI World Equity index rallied 7.45% and 6.92%, respectively. After achieving these new highs, stock markets around the world suffered a significant pull-back, with the S&P 500 and the MSCI world having retraced 10.16% and 9.1% in the nine business days between 26th January and 8th February. Meanwhile, reactions in protective assets, such as gold and long-dated US Treasuries, were relatively muted (Figure 1). 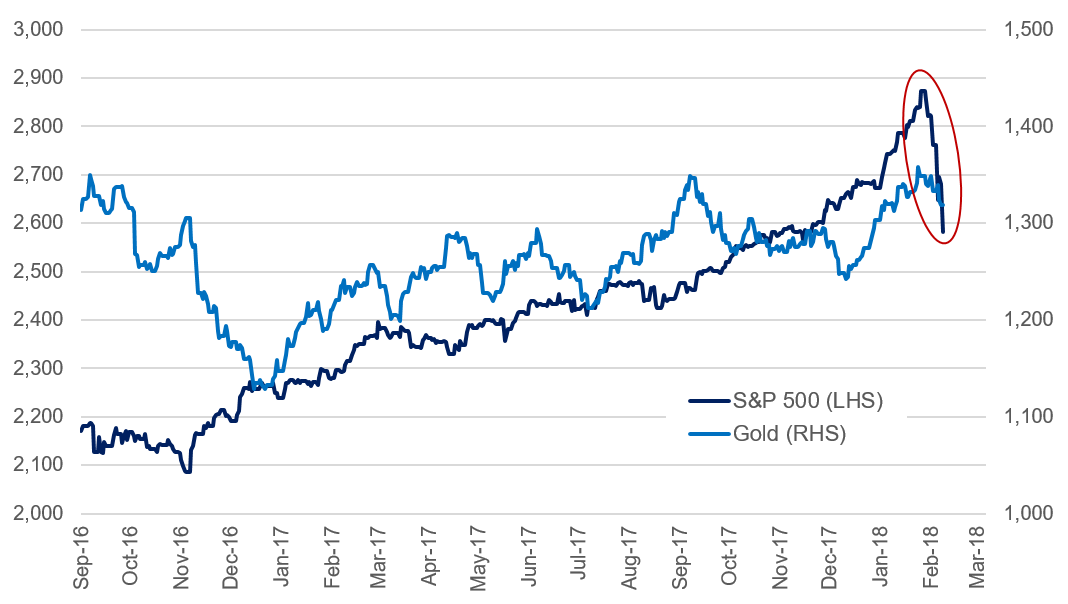 A powerful current developed at the World Economic Forum at Davos, and has morphed into a market concern. President Trump’s newly imposed tariffs on solar panels and washing machines, and Steven Mnuchin’s verbal favor of a weaker US Dollar have sparked widespread concern of a global trade war.

At the heart of this situation is the weakening of the US Dollar, which is being driven by the trash talk from President Trump and Steven Mnuchin to pressure nations into trade concessions. This is the "under-current" that is creating higher volatility in the markets. A weaker US Dollar indirectly forces a tightening of monetary conditions in economies with pegged or managed float currencies. If a weaker US Dollar persists, APAC countries, such as China, Hong Kong, Malaysia, Singapore and Indonesia, are likely to be negatively affected. In our view, these political rhetorics are likely to be the posturing into upcoming trade discussions, and is unlikely to escalate into a global trade war.

We are having a Correction, NOT a Bear Market.

What we have been experiencing between 26th January and 8th February is a classic correction, not the beginning of a bear market. Corrections are usually defined as rapid, intense, and sentiment-led declines in the stock market of between -10% and -20%. Even within a bull market, it is not unusual to see corrections, and when they do happen, it’s when many people least expect it. Examples of corrections in recent years are the taper tantrum of October 2015, fear of China slowdown in Q1-2016, Brexit-led sell-off in June 2016, and the markets’ initial negative reactions to Donald Trump’s presidential victory in November 2016. One thing these events have in common is the relatively speedy recovery of the stock market (see Figure 2 below).

In any case, market corrections are one of the reasons why StashAway believes it’s important for investors to own some protective assets, even when times are good. For long-term success, it is key to stay diversified. It is also advisable not to overreact to a correction, as there is high chance of being “wrong-footed” by market price actions.

Bull markets don’t simply end with a bang. They tend to dissipate over time rather than vanquish at a moment’s notice. This means that bear markets tend to take a lot more time than corrections do to develop. Fundamental causes are usually behind the formation of bear markets (e.g. deterioration in growth or the bursting of a highly-leveraged banking system). Big down days, such as the one we’ve just had on 5th February, do happen during bear markets, but usually not at the beginning. A bear market develops gradually with gentle declines that can lure investors into complacency and be misled into viewing falling markets as buy-on-dip opportunities (see Figure 3). This is where information about economic trends and leading indicators help immensely. A portfolio that bases investing decisions on economic data would be more risk-aware and ready to adjust its asset allocations accordingly. Lastly, the gradual evolution of a bear market allows investors ample opportunities to react, unlike a correction that happens more suddenly.

Figure 3 - Bear Market tends to be Gradual. Its declines are gentle and interjected by lots of rebounds

How are StashAway’s portfolios positioned?

As reiterated in our 2018 Outlook, StashAway has been expecting higher volatility as valuations for many growth oriented assets are high. We have been helping investors to buy growth assets that are less overvalued. At StashAway, this is an automated component of our investment service called “re-optimisation” and is a free service for our clients. In December 2017, StashAway re-optimised and strengthened clients’ portfolio defenses by increasing allocation to gold, which was and is still undervalued, and is showing positive momentum. This adds to the defensive posture already provided by the fixed income portion of all portfolios.

StashAway has built in partial exposure to the US Dollar to provide much-needed risk reduction in a stock market correction. Along with the Japanese Yen and Swiss Franc, the US Dollar is one of the major “funding” currencies in the world. Consequently, it tends to outperform most of the other currencies in times of a global stock market correction or in a bear market. For example, between July and November 2008, when Lehman went under, the USD/SGD appreciated by 13.5%. For a local investors in Asia, this appreciation provided valuable risk reduction. In the current correction, the USD/SGD is providing similar risk-reduction: in fact, from the 30th of January to the 8th of February, USD has appreciated vs SGD by 1.82%.

StashAway will keep managing clients’ portfolios with a systematic, data-driven approach. Our systems look at economic data, broad market data and asset class-specific data to adjust clients’ portfolios as economic and market conditions change. As of now, economic indicators are very clearly showing a positive picture, and this correction is not a significant change to market conditions. Investors should not overreact and should maintain a diversified portfolio. Should data show a rapid change in the situation, StashAway will react immediately.