The Latest Market Rebound Proves Why You Can't Time the Market

Only have 30 seconds? Here's what you need to know:

The markets are back up. Now what?

Investors talk about aiming to “buy low, sell high”, but executing that strategy can prove to challenge even the most seasoned investors. Why? Because nobody knows how to predict, read, and react to the countless and random reasons the market goes up or down.

To determine when the markets are high or low, investors look for pieces of information in the news and their financial models. However, the increasing amount of noise from the media coming at us these days makes the determinations to buy or sell even more imperfect. Media have become adept at churning out short-sighted news flow that synchronise perfectly with the latest beat of the market, but they’re consistently leaving out the bigger economic picture. Gloomy views from respectable names can dominate headlines when markets are down or geopolitical turmoil strikes (again). Then, upbeat stories from other respectable sources quickly surface when the markets are up. The end result? Investors get a lot of FOMO (fear of missing out) when markets rise, and they act irrationally when markets drop: they buy more when they see green (buying high) and sell, or stop buying, when they see red (selling low.)

It seems as though no matter how volatile and unpredictable the markets are, investors need to be reminded continually that timing the markets and looking to predict a monstrous change in the economic environment are futile exercises that can cost investors a great deal of money. I recently shared with Malaysia’s StarBiz, “Unlike humans, the market does not have a predetermined “biological” clock. Concepts such as timing the markets or the economic cycle often are susceptible to subjective biases”.

By now, we know that volatility can rise for a variety of reasons entirely unrelated to the health of economy. For one, Trump’s election victory over Clinton reflects the rise of populist politics. Populism is in turn empowered by highly efficient traditional and social media platforms. We now live in a world where a single tweet from Trump can disrupt the G20 summit! The amount of political noise that the market has to endure these days is exponentially higher. We can no longer blame the Fed’s attempt to withdraw from quantitative easing as to why markets are volatile; there’s too much going on to point a single finger in one direction.

Given that the media has the powerful ability to instill hope or fear with a single headline, step back and breathe before making any investment decisions actions based on something you read in your newsfeed.

Why am I saying all of this now? Because when it didn’t seem as though it could happen, the world of investing has become even noisier than it was last year. Look at the last few months: suddenly, the doom and gloom that plagued markets in the final quarter of 2018 disappeared, and stock markets around the world made big U-turns and remarkably outperformed last month. No one thought 2018’s troubles would end, and for now, things are looking good. But the truth is, when it comes to the markets, no one knows what’s going to happen, you could end up buying high and selling low when trying to time the market, which will only be disastrous in the long term.

Looking at the scorecard, we can see in Figure 1 that growth-oriented assets have quickly reversed their doldrums in 2018, and performed admirably in the first month of 2019. The riskier tranche of the stock market, US small-cap growth stocks were pronounced dead by naysayers in 2018. Then the sector went on to return +12.6% in January 2019 alone! 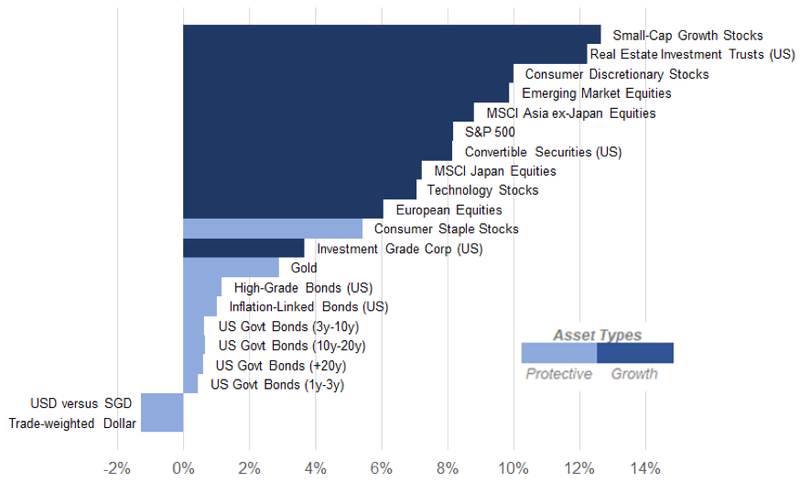 This feat is followed closely by Real Estate Investment Trusts, which benefited when the Fed changed its mind to raise interest rates two times instead of four times in 2019. The Fed’s softened stance on monetary policy has a cascading effect on other central banks in the world as well, and this helped REITs in the other regions perform well. In January, REITs in the Asia ex-Japan region (proxy by the FTSE EPRA/NAREIT Index) and Singapore (as proxy by the Morningstar DYF Singapore REIT Index) gained 7.9% and 9.7%, respectively.

Growth-oriented assets (shaded in dark blue in Figure 1) have outperformed protective assets in January 2019. Consumer staples and gold are the few among protective assets that have performed well. The US dollar tends to lose some of its shine when investors’ sentiment is more upbeat and especially when the Fed is less hawkish.

How to maintain a durable portfolio

Short-term scorecard aside, it is important to keep in mind the long-term benefits of retaining exposure to protective assets, such as high-grade fixed income and Gold. In addition, a global portfolio should have a sufficient amount of exposure to funding currencies, such as the US Dollar, Japanese Yen, and the Swiss Franc. Volatility can hit when it’s least expected, so we should always build some insurance into our portfolios to keep them durable.

The US economy has seen some pretty impressive growth for a long time, and now, many people are worried about whether its pace of growth may slow from here. However, let’s remember that we are talking about growth slowing from a very high bar. When it comes to the global economy, yes, it is true that the global economy has been lagging the US; global inflation-adjusted growth data in Figure 2 highlights that there has been a larger slowdown outside the US. However, let me emphasise: it is perfectly normal for the economy to catch its breath, and this scenario should not be confused with an impending recession. There’s a stark difference between declining growth and negative growth; the economy is still healthy, and growth is still positive.

In Figure 2, we use MSCI World Equities index to proxy the year-over-year performance of global stock markets. We use global inflation-adjusted growth as an index for the health of the economy. This index was helpful in identifying the two bear markets of 2001 and 2008. But, inflation-adjusted growth is not useful for predicting market corrections, which are sudden and rapid declines in the stock markets of between 10% and 19.9%. Corrections are unpredictable and not driven by fundamental economic causes.

Again, with the October 2015 correction aside, Figure 2 shows us that there is a good degree of co-movement between global inflation-adjusted growth and the year-over-year performance of global stock markets. That tells us that the economy is the ultimate driver of returns. Market corrections tend to recover fairly quickly when economy is solid: on average, a stock market correction can take 3-5 months to normalise.

What’s really important for investors is this: investors should not react to stock market corrections as they can happen even when inflation-adjusted growth is solid. So, let the markets go up and down, but keep investing consistently without reacting to headlines. Unless the economic numbers confirm a recession (they’re not!), it is too late for investors to be bearish at this point in time. 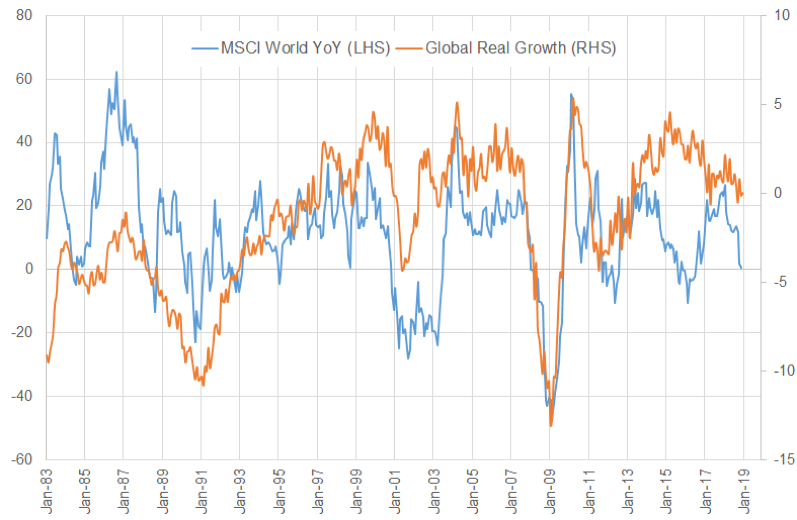 How can investors do well in the long run?

To do well in the medium and long term, we must learn how to control our FOMO (fear of missing out) and to rein in our inner fight-or-flight response. And it starts with having an investment plan.

Aside from helping to set risk levels that are compatible with an investor’s profile, a good investment plan should incorporate a target for how much to save from our income. The investment plan would detail a clear schedule on how these savings are going to be invested into a highly diversified portfolio. This strategy is otherwise known as ‘dollar cost averaging’ (DCA). By not risking an investor’s entire net worth, DCA smooths out the impact of market swings on an investor’s net worth. Psychologically, this helps investors avoid overreacting to short-term market noises hence improving the chances of achieving your long-term financial goals.