The Best Offence Is a Strong Defence, Even in Investing

Volatility is not a problem for intelligently-diversified portfolios

Perhaps it was an attempt to bully the Fed into cutting rates more aggressively, or perhaps it was simply a loss of patience with China, but either way, President Trump’s decision to slap a 10% tariff on all remaining imports from China has surprised everyone (yet again). Trump’s sudden escalation of the trade war with China on the 1st of August has shattered the trade truce that was brokered at the sidelines of the G20 summit in Japan on the 29th of June. In our view, these flip flops only served to amplify China’s mistrust towards Trump, and reaffirm our view that the trade war will not be resolved before the US general election in November 2020. As we are writing this, Trump has already flipped his positions again by delaying the latest tariff implementation to 15 December 2019.

In 2018, Trump had a strong US economy to back up his trade war with China. Now, the US economy is still growing, but at a more moderate pace. This slower rate of growth means Trump’s latest escalation brings with it more risk than before to both the US economy and the markets. There are also a slew of disappointing economic numbers outside the US that aggravated investors’ concerns. In Germany, the ZEW index saw the fourth consecutive deterioration in investors’ 6-month outlook for the German economy. The index fell to -44.1 (economists’ expectation was -28), which is the lowest level since 2011. In China, the Caixin Purchasing Managers’ Index (PMI) continues to weaken, and retail sales YoY for July came in at 7.6%, which was significantly lower than economists’ expectations of 8.6%. In Argentina, the peso dropped to a record low after President Mauricio Macri’s stunning loss at the primary elections. The sudden shift in voter sentiment in Argentina shocked foreign investors who now fear the return of currency controls and protectionist policies, should the Alberto Fernandez camp win.

Not surprisingly, most growth-oriented assets have underperformed protective ones in the third quarter so far. While protective assets have performed very well, for instance with long-dated government bonds and Gold gaining respectively 10.3% and 7.2% in the first 6 weeks of the quarter, the only bright spots in growth-oriented assets are REITs and high-grade corporate bonds in the US. These assets are interest rate-sensitive and have benefited from the Fed’s rate cuts. Interestingly, StashAway’s core portfolios1 have been resilient throughout the quarter and have gained between 1.3% and 2.2% for the quarter to date. Even high risk portfolios such as StashAway Risk Index 30% has returned 0.25% for the quarter so far. This goes to show that intelligent diversification and the focus on maximising “risk-adjusted returns” can help investors navigate the ups and downs of market cycles.

As highlighted numerous times by our past CIO Insights (starting with June and July 2018 issues), the US economy has been relatively stronger than the global aggregate, and therefore US equities have been more resilient than the rest of the world. This has continued to play out in the third quarter of 2019 so far. As shown in Figure 1, losses in different segments of the US stock markets are significantly smaller than other markets 1.1%, 1.2% and 2.6% were reported for S&P 500, small-cap growth, and consumer discretionary stocks, respectively). Equities in non-US markets have fared a lot worse with Europe, Singapore, Emerging Markets, and the Asia ex-Japan region, having lost 5.1%, 6.4%, 6.5%, and 7.4% respectively in the third quarter leading up to 16 August. 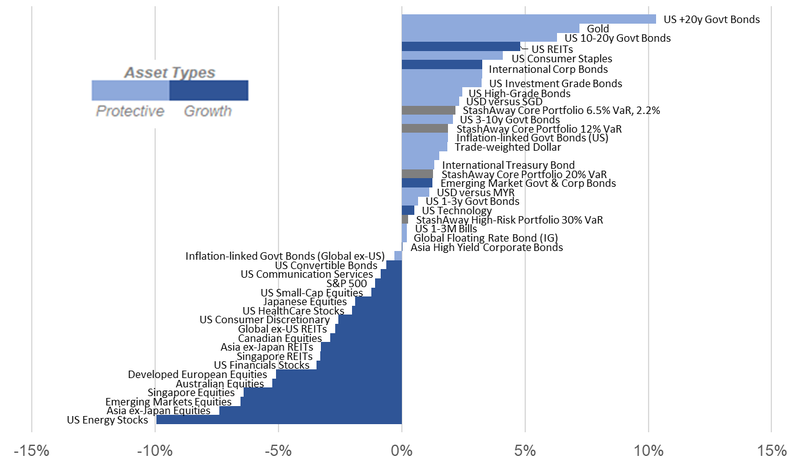 Based on its study of systemic market drawdowns in the past, our investment framework, ERAA®, has also long maintained (since we launched in July 2017) that safe-haven currencies, such as the US Dollar and the Japanese Yen, would perform relatively better than other currencies in times of high uncertainty. This data-driven stance has also played out in Q3. On a quarter-to-date bases, the US Dollar gained 1.1% against the Malaysian Ringgit.

Re-Optimising your portfolios for the times ahead

As some of you may know, we’ve recently announced a few exciting innovations:

To better understand the logic behind ERAA®’s re-optimisation, let’s look at some of the key economic insights that ERAA® is capturing, and their effects on investors’ asset allocation.

ERAA® Insight I: Global economies face greater uncertainty than the US

In the US, growth is likely to be slower than the high bar we have witnessed in the last couple of boom years. We can observe this with the peaking out of US industrial production which was at 5.3% yoy in September 2018. As of the latest data released in June 2019, US industrial production has slowed to an annualised growth rate of 1.3%. The important thing to keep in mind here is that the US economy is still growing. With inflation persistently low, the US economy is still in an environment that is conducive for growth-oriented assets to do well. Moderate growth is not to be confused with a recession.

In contrast to the resilience we have seen in the US, the global economy faces a higher level of uncertainty. Just looking at China, the Li Keqiang Index2 has shown that a cyclical slowdown has already begun since February 2017 when the index peaked at 12.85% YoY. By June 2019, the Li Keqiang Index has declined to 6.85% YoY. Remarkably, this cyclical slowdown in the Chinese economy has started roughly a year before the US-China trade war broke out.

The cyclical headwinds have also reached other economies, such as the Asia ex-Japan region, Emerging Markets, such as Brazil, and the Eurozone. As shown by Markit’s Eurozone Manufacturing PMI3, which has declined from 62 (December 2017) to 46.5 (June 2019), European manufacturing activity has been declining rapidly since December 2017 and weighed on overall economic activity. 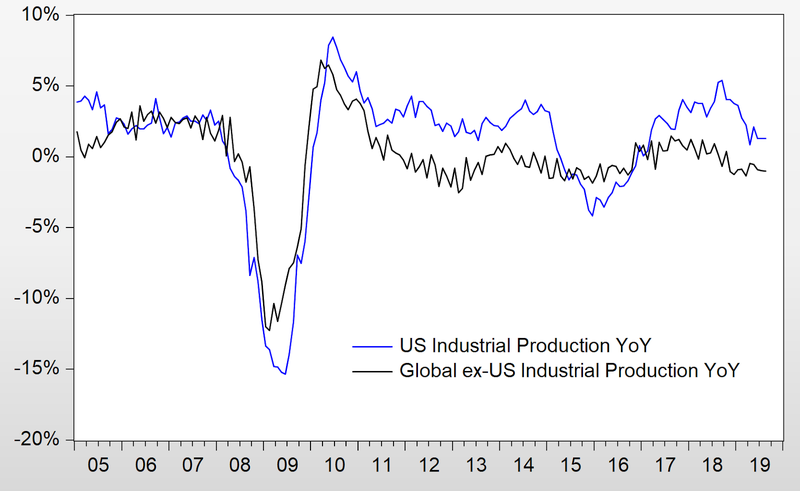 What this all means is that high-risk portfolios at StashAway will be more US-centric because ERAA® is going to be focused on the US when it comes to investing in growth-oriented assets.

For clients of StashAway who have low to balanced risk rated portfolios on our platform, you may notice that your bond holdings is now very global.

Intuitively speaking, bonds perform better when the economy slows. Along this line of thinking, the reward-to-risk ratio for bonds of countries that are faring relatively poorer than the US will be even more attractive from here. As discussed above, the global economy faces higher uncertainty than the US, and therefore ERAA® has switched from its US-centric bond holdings to a version that is much more globally diversified. As shown in Figure 3, we can observe that exposure to the US due to bond holdings have fallen across all portfolios. In the case of our lowest risk rating (99%-VaR of 6.5%), portfolio’s exposure (due to bond holdings) to the US has fallen from 57% to 33%.

Figure 3 - US Exposure of Bond Allocations, New vs Old 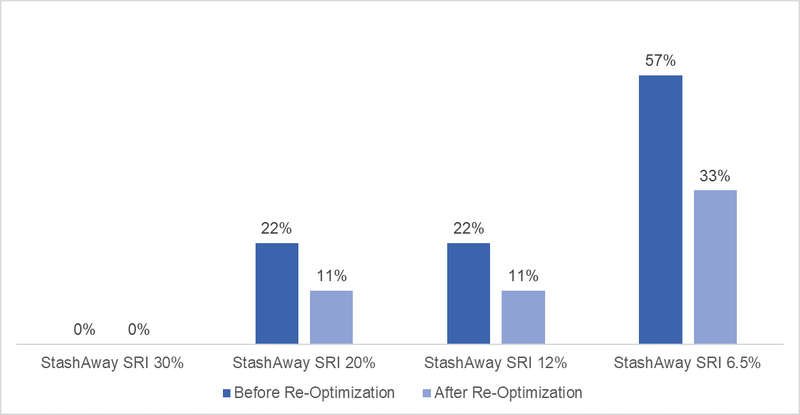 ERAA® Insight III: In view of flat or inverted yield curves, average bond maturity has been reduced from 13.5 years to 7.9 years

What would be a more meaningful discussion is what should long-term investors do with their income-generating bond holdings when the yield curves are flat or inverted.

In general, for buy and hold investors, the future returns of a bond decline with interest rates, although investors would make an immediate capital gain today. Now, as the yield curve is a comparison of long- versus short-term bond, the additional returns over and above short-term bonds shrinks when the yield curve is flat, due to taking more interest rate volatility. In the case of an inverted yield curve, where long term rates are below short and medium term, the future expected return of long term bonds is low. As ERAA® looks at the shape of the yield curve to estimate the future return of holding bonds, it has re-optimised its choices by switching from an average maturity of 13.5 years to 7.9 years (Figure 4).

Spoiler alert: Due to the recency effect, most humans on this planet are likely to find it difficult to agree with ERAA®’s valuation adjustment in this section. And that’s exactly why we trust data over human gut: to avoid biases.

You might also be wondering why ERAA® is allocating funds toward European equities despite weaker economic performance in the Eurozone. One of the core pillars of ERAA® is to monitor market’s valuation relative to economic fundamentals and to make valuation adjustments whenever their differences are significant. In the case of European equities,  ERAA® identifies that the market has priced in a level of sentiment that is significantly more depressed than what economic numbers are suggesting. As a result, ERAA® makes an upward adjustment to the expected returns of European equities. The last time ERAA® made such a valuation adjustment was in mid-December 2017 for Gold. Back then, Gold price was hovering around 1247. Fast forward 18 months to today, and the valuation gap for Gold has narrowed (i.e. Gold is now less undervalued than before, but still undervalued), and Gold has rallied from 1247 to around 1500 for 20% returns. However, the valuation gap for Gold is only partially corrected and ERAA® continues to maintain significant allocation to Gold. As you can see in the gold example, ERAA®’s valuation adjustments are medium to long-term in nature; the same logic applies to European equities.

So, what to do next?

At the cost of sounding boring, we will repeat the mantra we have been writing about for the past 25 months, since we launched in July 2017: stick to your plan. Make sure that your portfolios are at a risk level you are comfortable with, and continue to contribute to those portfolios through the natural ups and downs of the markets.

On our side, we will continue to provide you with global, scientifically-designed, diversification, and we are committed to continually bring you innovations when it comes to managing your savings. The re-optimisation of your portfolio that we announced last week is the result of bringing to you the best-in-class from technology and investment techniques, to make sure you can build financial peace of mind for yourself and your family. We also believe that intelligent investing doesn’t have to be expensive and re-optimisation is a free (and optional) service that is available to all StashAway clients.

On behalf of the entire StashAway team, here’s to intelligent investing.

[3] In a purchasing managers’ index (PMI), a figure above 50 represents that output is growing. Conversely, a figure that is below 50 represents a contraction in activity.