Stay Focused on Diversification Even as Markets Rebound

By now, it’s well-known that the central banks’ massive monetary stimuli have caused the markets to significantly disconnect from the economy. Since the historic market crash in March, global stock markets have recovered substantially: as of 17 August, the MSCI World Equities Index gained 48.8% since the bottom on 23 March. The index is now just 2.1% shy of its pre-pandemic high.

Though the markets’ rebound has outpaced the economic recovery, the latest economic data tell us that the global economy is starting to improve and slowly catch up to the markets.

The global economy is improving but some challenges remain

We know that the markets are a fast-moving voting engine that prices information quickly. As you may recall, the markets rebounded sharply after the Fed announced its massive monetary stimuli in March. In the eyes of the market, the monetary stimuli were large enough to help cushion the economy in the near term. In fact, we previously analysed the impact of the Fed’s $2.3 trillion USD stimuli and estimated that it would make up for about 8.2 months of lost GDP output in the US. Based on that market rebound, ERAA® inferred that, as early as April, the markets expected the economy to recover from a deep recession (see orange line in Figure 1).

At the time, it was hard for most people to comprehend how the markets could expect such a recovery when most of the economy was halted due to the lockdowns. But we need to remember that any monetary action, including the Fed’s stimuli, takes time to trickle down into the economy. Banks need time to process loans, and businesses and consumers need time to spend the money they get from the banks and the government. In short, it's understandable that the economy will lag behind the markets.

Now, we see that the latest data from the Conference Board Leading Economic Index (LEI) is starting to reflect the market’s late-March expectations of the economy. The LEI, our preferred leading indicator for the US economy, shows that the US economy has significantly improved, rising from a low of -13.2% YoY in April to -8.6% YoY in August (blue line). As we can see in Figure 1, the markets already priced in around -8% YoY growth in late-March (orange line). Markets bottomed out and recovered in March, now, about 5 months later, we see the economy starting to do the same. At the current market level, markets are pricing in around 0% YoY growth in the economy. Whether the LEI will continue to follow in the same trajectory as the markets remains to be seen. 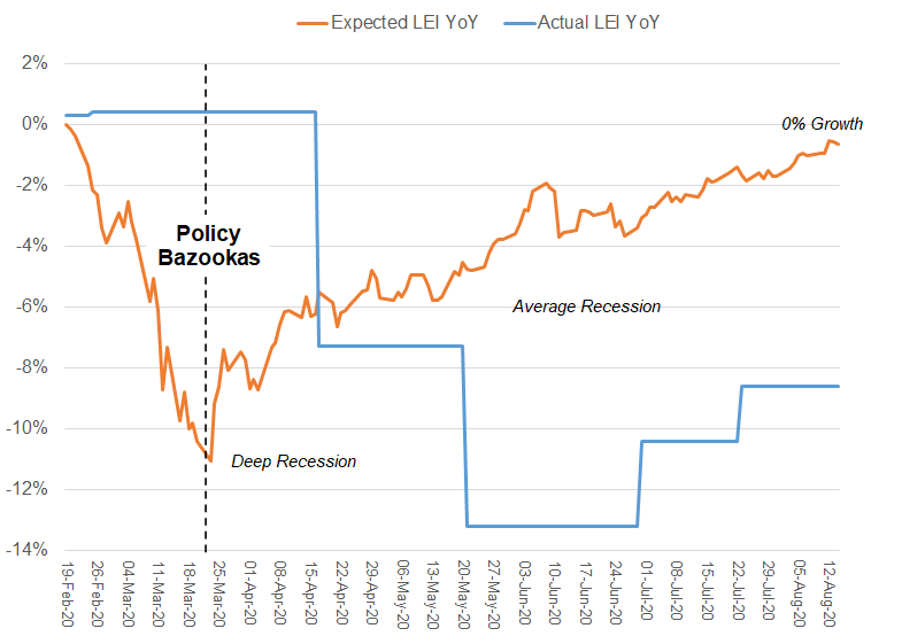 In addition to the LEI, other economic indicators also show positive developments. In particular, retail sales data from the US and Europe are now close to January’s peaks, and the global manufacturing PMI shows that manufacturing production activities are expanding for the first time since the start of the pandemic.

While these signs of economic improvements are encouraging, how long and how much economic uncertainty we might endure in the near term depends on how long it takes to create, mass-produce, and distribute an effective vaccine. Until we get a vaccine, any number of short-term challenges can bring about volatility in the markets, and this volatility can happen when you least expect it. So, it’s important not get carried away by the overall market enthusiasm, and to maintain a diversified portfolio with protective assets that can counteract that volatility.

Against the backdrop of the current pandemic, markets are yet again faced with a political feud between the US and China. And, this time, Chinese technology companies are caught in the crossfire.

In the past month, the US government took aggressive steps to restrict the presence of Chinese technology companies in the US. On top of the recent restrictions on apps, such as TikTok and WeChat, and hardware companies, such as Huawei, the US also wants to limit the presence of Chinese telecoms, cloud services, and undersea cables in the US through the Clean Network program. This means no Chinese apps in US app stores, no US data stored on Chinese cloud services, no US apps on Chinese smartphones, and so on.

Despite these restrictions, China’s Internet companies as an asset class have gained 38.8% in YTD USD returns. Some investors may reason that US technology firms have less to lose than their Chinese competitors in the US-China feud, but China Internet has outperformed both US technology and US communication services as shown in Figure 2. 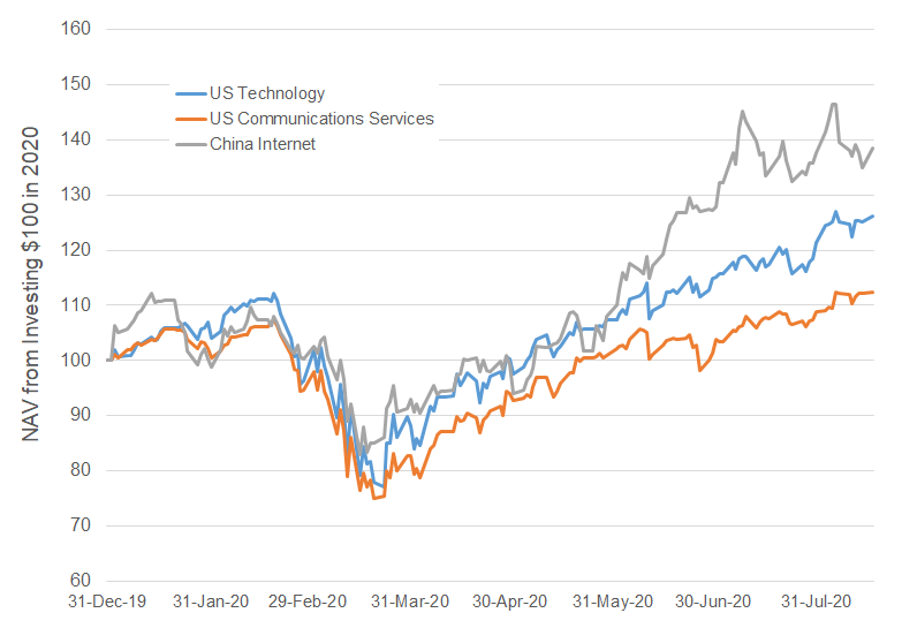 Even with China Internet’s outperformance, it’s uncertain to what extent the escalating tensions between the US and China will impact the sector. In fact, markets priced in this uncertainty: Figure 2 shows increased volatility in China Internet (grey line) since the US imposed limits on TikTok and WeChat in the US. Markets are also waiting to see how the US general elections will pan out in November as the results of elections could determine whether US-China tensions will continue or reverse course.

Despite the significant long-term potential, there’s a lot still up in the air for the Chinese tech sector in the short term, namely surrounding the ongoing US-China tensions. When there’s uncertainty in a sector, that uncertainty could translate to increased volatility in the short term. While you still should have exposure to the assets, such as China Internet, that can generate long-term growth, having portfolio insurance (e.g. Gold and government bonds) as part of your investment strategy ensures that your portfolio isn’t overexposed to asset-specific volatility.

Diversification is the most effective way to mitigate asset-specific risk

With the global market rebound and the run-up in Chinese tech stocks, it can be easy to look at the short-term performance and conclude that it’s better to concentrate your investments in one or two asset classes. But volatility can strike at any time in any asset class.

Whether uncertainty is present in a specific asset class, such as China technology stocks, or in the overall global economic landscape, a diversified portfolio with strategic exposures to both growth and protective assets helps your investments stay resilient in the short term while still positioning them to grow for the long-term. As Joel Greenblatt puts it, “You must be diversified enough to survive bad times or bad luck so that skill and good process can have the chance to pay off over the long term.”