As we move into the new year, we’re looking at the potential major market movers to determine which investment strategy will best prepare your investments for what’s ahead. Globally, we continue to see COVID-19 cases surging throughout most major economies. The health of the global population and global economy hinges on vaccine development and distribution, as well as on whether governments can keep their economies afloat in the meantime.

The only reasonable prediction an investor can make for the year ahead is that the year be another one filled with uncertainty. We know vaccines are being developed, but when will they be distributed? We know that governments are trying to support their failing economies, but how far will they go? We know the technology sector is facing antitrust headwinds, but what will come of that? We know that China is on the rise, but what impact will that have in the short term?

When we look ahead in order to prepare your investments, we won’t make predictions. Instead, we’ll establish what we know.

We know that vaccine development and distribution is progressing

We’re all watching the race to develop vaccines and distribute them at scale. Pfizer currently estimates that it could produce up to 1.3 billion doses by the end of 2021, while Moderna gives an estimate of between 500 million to 1 billion doses in the same period. AstraZeneca has set itself apart by committing to selling the vaccine at cost price of $3 per dose compared to $20 for the Pfizer candidate and $10 to  $50 for the Moderna one. Furthermore, AstraZeneca has partnered with leading vaccine manufacturers in India to produce the vaccine as a means of ramping up production. These vaccine developments are glimmers of hope for a return to some semblance of normalcy.

And it’s not only a matter of deciding who is considered ‘at-risk’. Not only will each country prioritise vaccine distribution slightly differently, but once there’s a vaccine, not all countries will receive the vaccine at the same time, nor will any country have enough all at once. Currently, several countries have in place existing supply agreements with pharmaceutical companies to see that they get the vaccines “first” (See Figure 1). 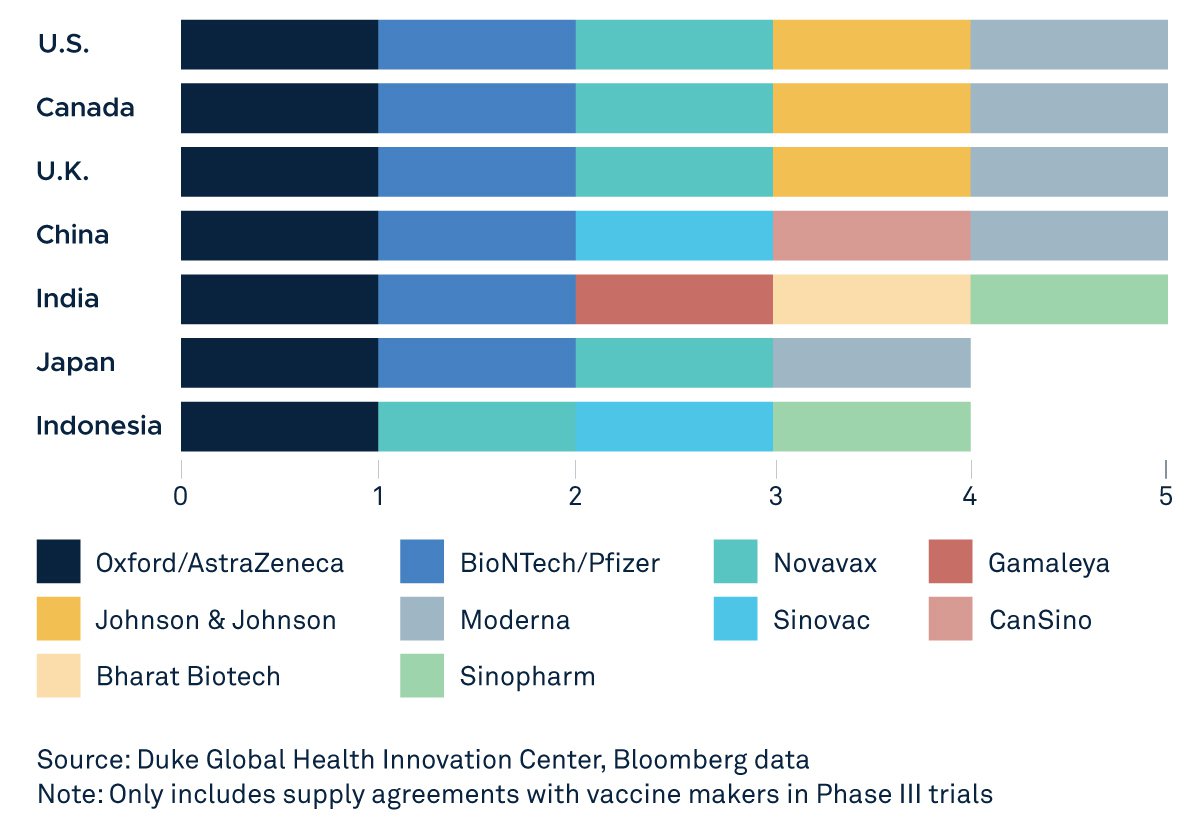 Regardless of which populations get the vaccine first, second, or third, the World Health Organization (WHO) has projected that the world ultimately needs 23,995,000,000 doses (assuming 2 doses per person and 15% of production lost to waste). Keep in mind that figures from Pfizer, Moderna, and AstraZeneca are less than 5 billion doses.

This is all to say that we still have a long road ahead of us when it comes to vaccine development and distribution, as well as when it comes to rebuilding the economy. The pandemic struck a globalised world. It disrupted highly-complex supply chains that rely on each country to be up and running. As each country and economy gets back up and running at different paces, supply chains will remain disrupted. So even if some countries open up, their economies will likely remain handicapped if they rely on imports from countries that still don’t have the vaccine.

For example, tourism in developing countries will remain low until people from other countries can safely start traveling, and there will be weakened demand in other industries. The reality is that some countries will struggle more than others to recover and get back to (or close to) pre-pandemic production, trade, and employment levels.

We know that vaccine developments have sparked sector rotation

The recent news of vaccine developments has made investors quite optimistic. In Q3 2020, China (and Asia in general) had experienced less of an economic contraction than the West did, as the West has been facing more uncertainty due to the way the pandemic has gotten out of control there. This less-severe economic contraction allowed sectors, such as industrials and consumer discretionary (that export a lot to Asia), and Asia ex-Japan stocks, to outperform. Then, with the news of the vaccine in Q4, investors became more optimistic. In Q4 QTD 2020, major stock indices are now returning to pre-pandemic levels, with the energy and financial sectors outperforming the most.

Figure 2  - Beaten down sectors are starting to rebound

With the vaccines being deployed in stages, we expect continued structural rotation away from sectors that have outperformed throughout the year into sectors that will benefit from the world going back to normal. That means we could start to see increased travel benefiting airlines and energy, people returning to shopping malls benefiting commercial REITs, and a recovery in consumer spending benefiting discretionary stocks, for example.

Keep in mind that sector rotation doesn’t necessarily mean that sectors that have been doing well would suddenly start performing poorly. Instead, it means that other sectors would start performing relatively better than they had been before. You could see overvalued sectors start to perform more modestly, and undervalued sectors grow. In other words, this isn’t necessarily a time to write off the sectors that haven’t been performing.

In addition to sectors that are more directly impacted by the vaccine (or lack thereof), there are other sectors that we also expect to perform differently next year than they did this year. Specifically, we’re looking at the technology sector, which has antitrust headwinds brewing that might dampen returns for these tech companies. We’ve also seen the Chinese government reining in uncontrolled growth of Chinese technology companies through increased regulation. This would make growth in the Chinese technology sector more sustainable in the long run, but would slow short-term growth of these companies.

The US has some of the worst case numbers in the world, and that’s hurting the US economy. The US government needs to figure out a way to stimulate the US economy not only for the sake of the US economy, but also because the global economy depends on the economic superpower to be strong.

The US has seen its monetary policy become increasingly ineffective as the velocity of money slows and Mnuchin closes several of the Fed’s emergency-lending facilities. That makes it all the more important for the US Treasury to approve new fiscal spending to support the economy.

The back-and-forth in Congress between Republican and Democrat leaders has delayed the discussion of any additional stimulus since the initial bill passed in March 2020.

No matter how much eventually gets passed, it’ll likely fall short of the estimated $2 trillion USD required to stabilise the economy. This makes the runoff elections in Georgia in January 2021 even more important: If the Democrats win the 2 seats in Georgia and get a majority in the Senate, we can expect to see a third larger stimulus bill. This would be beneficial for markets. If they don’t win the 2 seats, the stimulus talks could be further delayed.

We know that China is emerging as a world economic leader

Trump’s version of the trade war ironically backfired in that it ended up instilling in China a great sense of urgency to develop its own technological independence since it can no longer trust or rely on the US as a trade partner. Although we expect the Biden administration to be generally more collaborative with international allies instead of resorting to unilateral tariffs to engage China, we’re keenly aware that China’s emergence as the next superpower has alarmed Republicans and Democrats alike.

The US fears that China will eventually be able to craft semiconductor chips for everything from artificial intelligence and data centers, to autonomous cars and smartphones. The US views China’s technological ambition as an issue of national security, and so has gone so far as to interfere with US businesses’ decisions about where to manufacture chips and to whom they sell them. Trade tensions could kick into overdrive as the Chinese Communist Party leaders set a five-year plan that will include developing its domestic technology industry, notably its chip capabilities.

The trade war could threaten to decouple the US and Chinese economies. With a plausible new world order, investors should look to make sure they have diversified holdings in order to benefit from growth in either superpower.

The markets will continue making bets on what’s going to happen, but we’re ignoring the bets, and focusing on the economic data and what we know. What we know is that ongoing developments throughout the world make it so that uncertainty is likely to remain high in the coming months. Current world governments have not laid out plans for further stimulus beyond what we’ve seen this year. And yet, it is likely that the effects of the vaccine would only likely be felt in 2022 or 2023.

All of our clients have been in All-Weather strategies for non-US asset classes since August 2019. In May 2020, we knew that uncertainty was going to be the prevailing sentiment for months, if not years. And so at that time, our system positioned all of our clients’ portfolios to navigate this uncertainty by moving them into a global All-Weather strategy. Here’s how each of our portfolios have performed year to date:

Though we don’t know what will happen next year, we’re confident that our clients are prepared for the ongoing uncertainty that the world will face in 2021.